Ending A Crappy Year For Music & Welcoming A Fresh New Year – On The Right “Note” by Photographing Hoobastank and Alicia Keys.

Both awesome acts, brought in (many many thanks!) by IMC Live, performed at the Rock On! 2017 Concert at the Float@ Marina Bay to usher in the New Year.

This thought-piece is not a concert music review. It’s more of a photo summary of the magic moments (warmth and music mastery of the artistes) I’m blessed to have witnessed both back stage and on stage.

Because I hung out with Hoobastank, I didn’t get to see the earlier acts who performed that night.

My friendship with the members of Hoobastank goes back to 2007 when they came for a concert staged by LAMC. We try to meet whenever they are in town. The last time they came in 2014, I was in Dubai when my family. I’m glad we could hang out this time, to end a dreadful year on a right “note” (musical pun intended).

The band and I met and chatted at the hotel lobby at 8.15pm. Then we boarded a MPV which drove us to the concert venue. 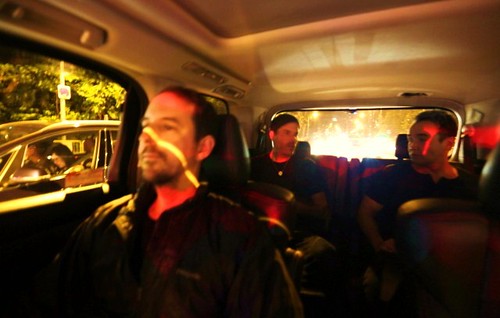 Hoobastank in the MPV, soaking in the skyline on the way to Marina Float. 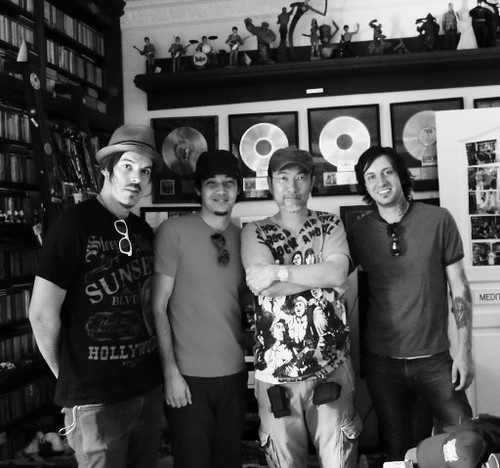 Along the way , they asked whether I was still staying at the home where they visited during the previous gig in Singapore. They were impressed at my music artefacts akin to a Hard Rock Café. The above image was taken when Hoobastank visited my home in 2009. 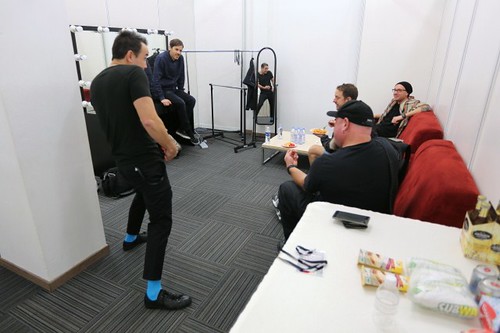 Band members having their usual pre-show bonding fun. Always great when bands know you are there but leave you alone to do your stuff. I’m always conscious never to intrude into their conversations. 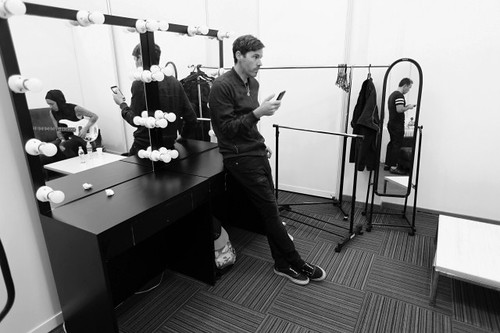 I used the reflections on the room mirrors to add flavour to the band image. You can tell from this candid shot that they are indeed close and have fun with each other. Which, in turn, explains the tightness of their sound when they play on stage. 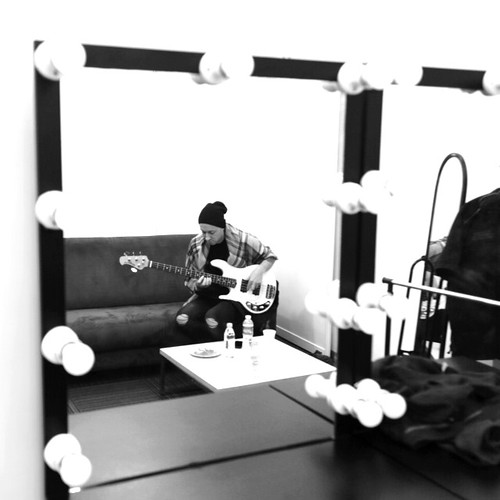 Jesse in his zone, psyching up for the big show ahead. 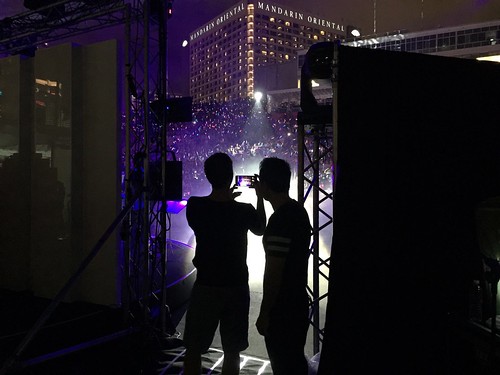 Yes, it’s always advisable to survey your fans and venue before hitting the stage. “Sung Tze – The Art Of Roar”.

Which reminds me of my usual advice to both young photographers and young Lifers – “Look before you Seek”. 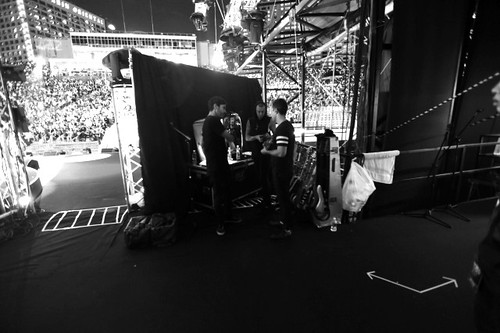 Band members have quick chat before their performance 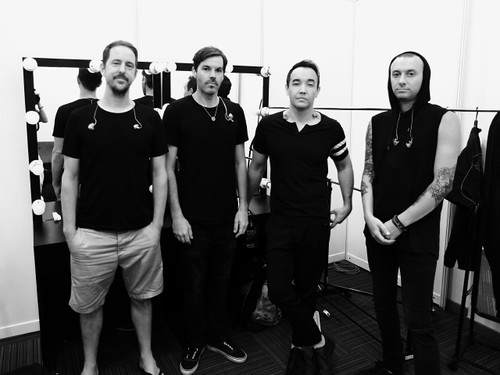 A quick portrait before the band heads for the stage. Note their in-ear monitors in place, for an accurate and rocking performance for their fans outside. 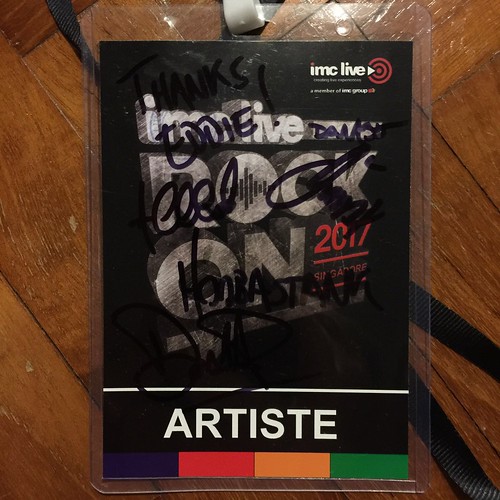 The Artiste concert pass outranks the All Access Areas passes, which in turn outranks the Photo or Working passes. With this pass, I go anywhere the band members can go. Even onto the stage itself. Which I did.

It’s always a privilege to shoot bands from the stage, and even more exhilarating – from the front of the drum riser, literally a few feet from the rock star. You get a rare glimpse of what the rock stars sees and feels. 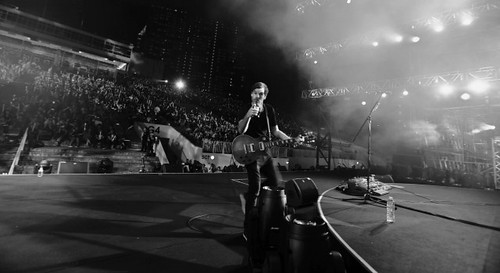 Dan having fun with my lens. 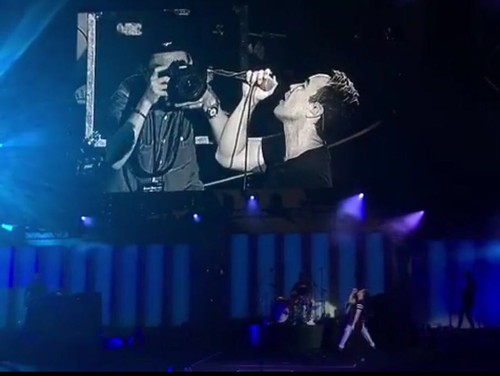 It was Doug who said it was totally okay for me to get out into the stage to photograph the band. Not to abuse that privilege, I only went out once, during their most beloved song –The Reason.

I liked the way the smoke surrounds Jesse as he delivers his thick bass lines. 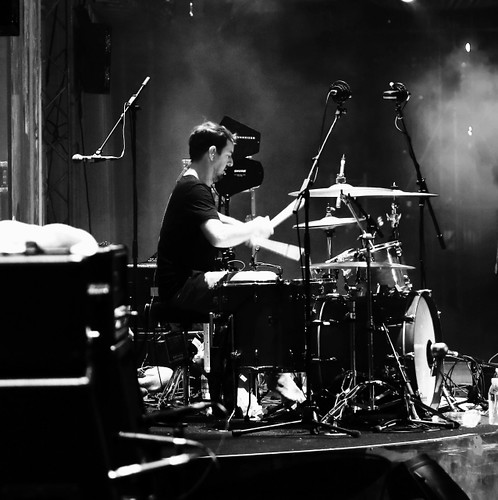 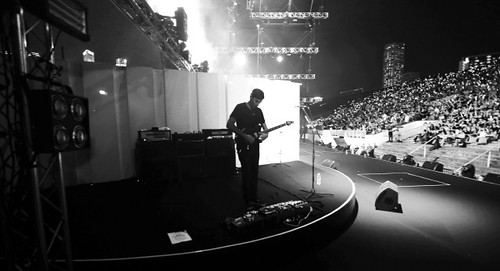 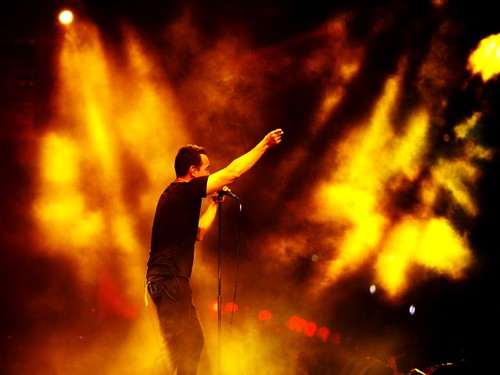 I saw at one point that thick smoke was about to engulf Doug. I waited till totally surrounded him before I took this “explosive” shot, like in a war zone. 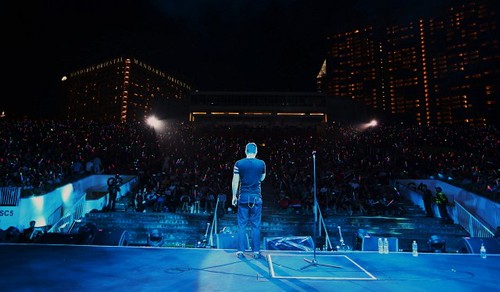 Doug sings the crowd pleaser- The Reason. One of my all-time favourite songs. 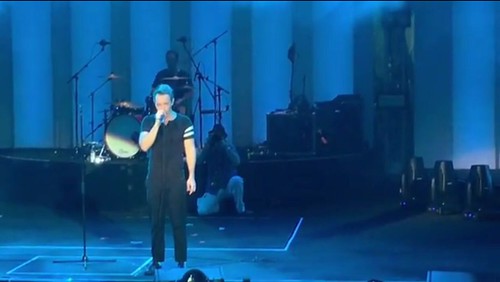 Interestingly this shot was taken at roughly the same moment as mine (above image) but from the front of the stage.

After their set was over, I would have liked to hang out some more with the band but I detected they were shacked out, with the added burden of a jet lag and having to catch an early flight home the following day. As Doug wanted to veg out in his room, I decided to stay to shoot the Alicia Keys performance.

Well, as they say, when a door closes on you, another (with Keys) will open for you. In this instance, it happened to be Alicia Keys. 😉

I respect Alicia Keys for her musicianship and for her personal musical direction. Integrity, dignity and soulfulness. I wanted to capture these qualities in my images of her. Alicia is so gifted at the piano; it was like an extension of her body.

She’s so awesome, Bob Dylan even name drops her in his song “On Thunder on the Mountain” from his album, Modern Times.

I’m honoured that she was kind to my lens throughout her performance. 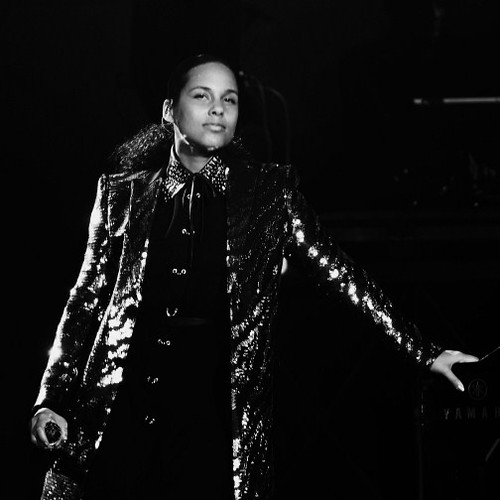 I managed to capture Alicia looking relaxed for a brief moment. Taking time to appreciate the magnificient ambience of the great marina venue and her adoring fans. And for a fleeting moment, looking into my appreciative lens. 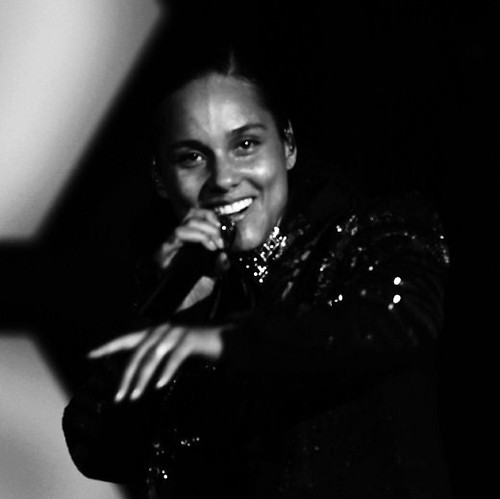 Always having an easy smile on her face, Alicia puts on a powerful yet fun show. 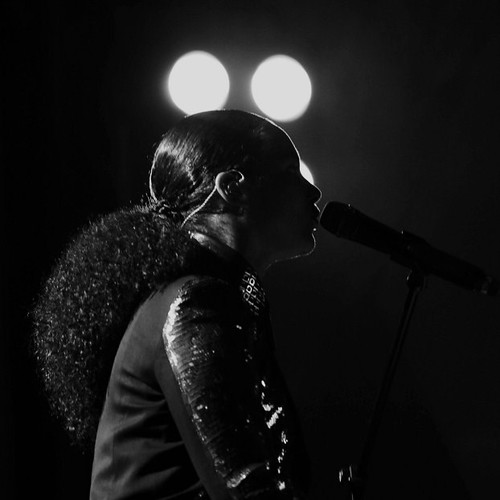 There was a split second when Alicia stood in front of the spotlights. I moved myself an inch to the left to frame the shot so that the “Mickey” ears and her face profile were more obvious in the bright lights. My favourite shot from Alicia’s performance. 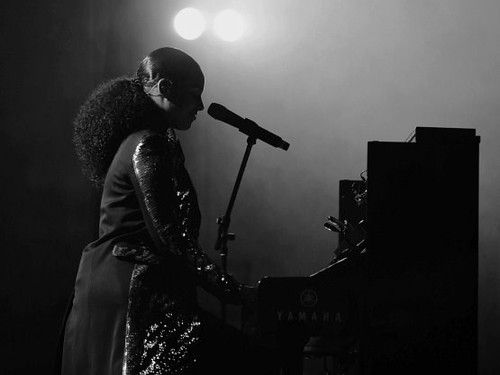 Her weapon of choice – the piano – brings out the seriousness of her songs. And yes, she plays the piano, standing up. 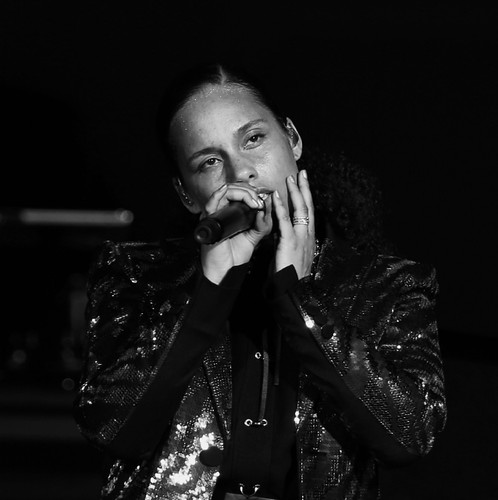 Another moment when Alicia enjoys her quiet moment on stage amidst a loud crowd. 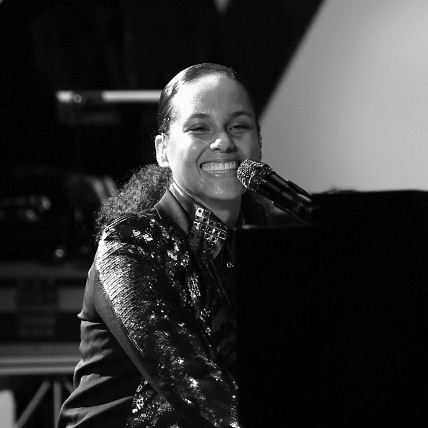 With her ever-present smile, she looks briefly into my lens. Thanks, Alicia! 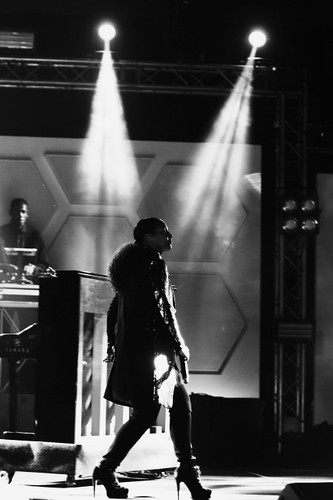 Alicia struts her stuff in her killer stilettos. 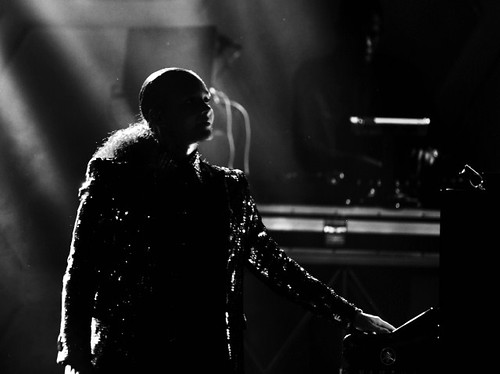 I like how her shimmering jacket shines in the shadows. You can still tell immediately it’s the awesome Alicia Keys. 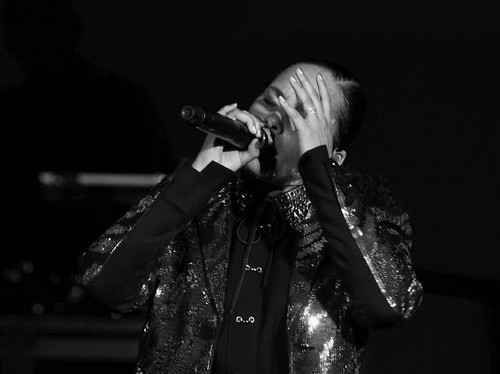 Alicia puts her heart and soul into her emotional songs. 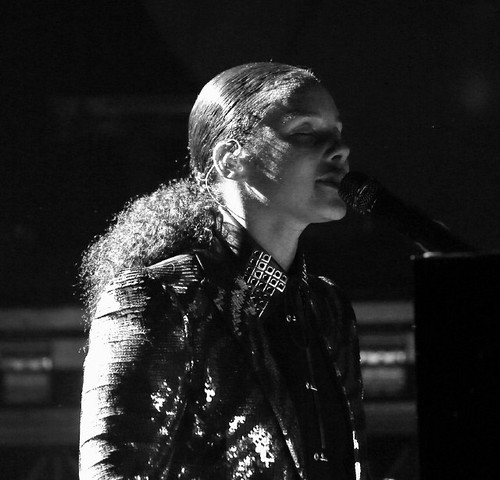 Another favourite image captured during her performance. Her face is bathed in a strange light while she retreats into a reflective moment of calm. 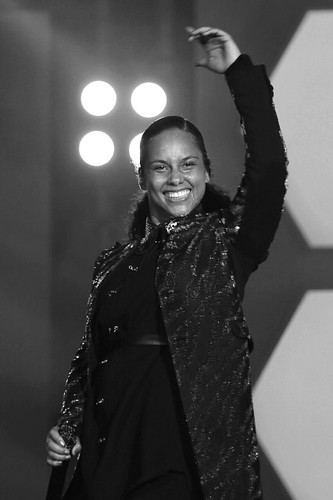 After a powerful performance, pleased with her fans, she raises an arm to gesture her heart-felt thanks.

Thanks to the guys in Hoobastank (Doug, Dan, Chris and Jesse) and Alicia Keys for their great performances. It certainly ended a lousy year and starting a new one – on the right “Note”.

For more of Eddie Sung’s rock images, please visit his website at www.eddie-sung.com