Photography and toys are different forms of art, and it’s no surprise for one to fall in love with both. Acclaimed photographer Eddie Sung is one of them, as he describes his pop culture collection, his inspirations, and pictures of the collections and photography in the article below: 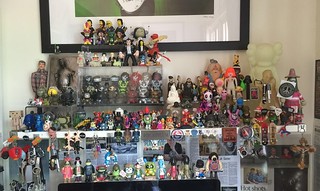 How long have you been collecting toys?
Since I was a young lad. My dad used to buy me Matchbox and Hot Wheels cars, which I’m proud to say I still have them. In near-mint condition after all these decades.

We hear of the regrets people have of not keeping their childhood toys which are worth a small fortune. Not me, I keep my childhood memories close to my heart. I also have those valuable record vinyls that I bought when I was a teenager. They are all first press and in near mint condition. 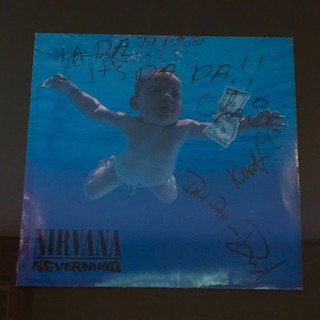 In the wake of Funan Centre’s closure, I’m reminded of fond visits to acquire rare CDs. I still have the signed Nirvana album cover by all three band members to ! After a colourful bargaining wrangling with Peter Quek the owner, I happily paid $450 (via NETS) for this rock artefact and two other Nirvana signed treasures (CD long box and “Smells like Teen Spirit” single cover)!

As I got older and my salary rose, so did the prices of my toys. These days I collect designer urban vinyl toys which range from a few dollars to a few thousands. For the rare and sought after figures, prices have since escalated multiple folds. I display a tip of the iceberg of my collections at my home and the rest are kept in an air-conditioned storage. 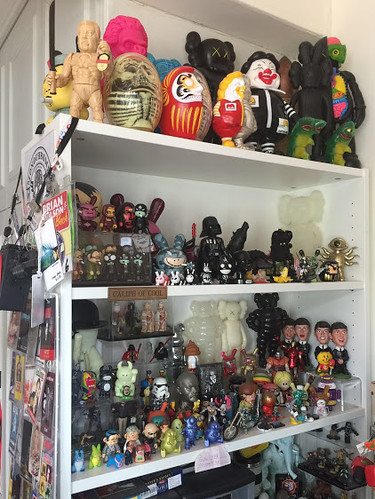 In your opinion, what is the co-relation between music and toys? Why does the hobby of collecting toys appeal to you?
There has always existed a parallel universe between music and the ancient art of toy collection of Pop Culture. Both makes me feel good, and keeps me cocooned in a creative consciousness. 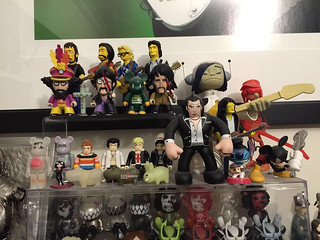 Music caters to the Ears and toys are a visual treat to the eyes. Both soothe one’s soul.

Though photography and toys are different forms of Art, what drew you to each of them initially?
One source for both – my dad, John (Sung). He used to buy me Matchbox and Hot Wheels toy cars, and I used to borrow his Yashica film camera.

John will be glad to note I still have the toys he gave me and I’ve made a name for myself in the international rock music photography scene. My beloved rock prints proudly displayed at Hard Rock Cafes and my prints are sold in New York’s legendary Morrison Hotel Gallery(MHG). In fact I had my solo rock photography exhibition in New York in 2014. 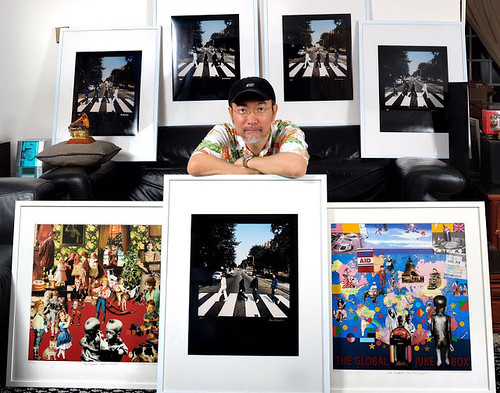 As a rock photographer, I also acquire iconic works by legendary rock photographers. My most treasured are the complete outtakes of the Beatles’ Abbey Road sessions (pictured above). A complete set was auctioned off at £180,000! And mine’s numbered #1 of the edition, which should fetch an even higher price. The photographer (Iain Macmillan) has since died, and works with his signature is very rare indeed. 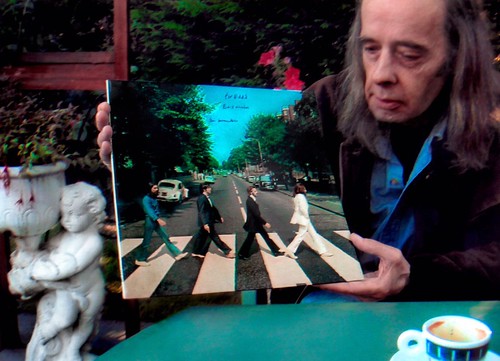 I’m so honoured to have Iain signing his personal copy of the Abbey Road album to me. (pictured above)

I also have a huge collection of the late Barry Feinstein’s amazing photography. There is a complete set of signed outtakes from the portrait photography session of Janis Joplin’s “Pearl” album.

Do you have friends who share the same toy collection hobby as yourself?
I indeed do. As sure as the sun will shine tomorrow, tribes will form when there is a common mission. 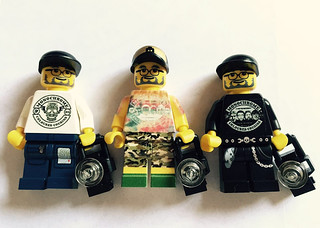 I’m honoured to have customised Lego figures made by a friend/fan in my image as a rock photographer. When he first surprised me with it, I was dumbstruck. Thanks, Hansen!

Toy collectors are eccentrics who hunt for their desired toy figures. The craziest of them all is Jeffrey Koh of FLABSLAB. Not only does he collect everything under the black hole sun, but he designs and creates cool stuff as well.

These days the internet have shrunk the hunting ground for toys into a TV monitor. Just click and the toy will arrive at your doorstep in a week.

For those figures I missed or for new cool stuff, and for helping me spend money, I have Mike Ng of Ozzo Collections to thank. 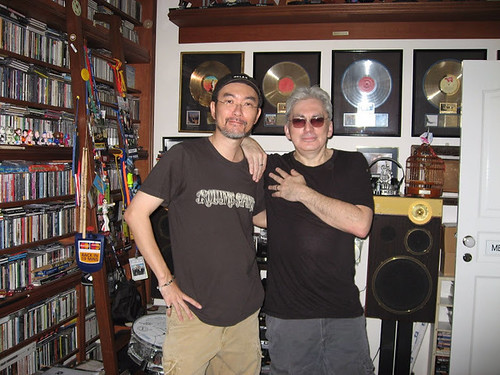 Can you name a rock star who shares the same hobby as you?
Chris Stein of (pictured with Eddie above). When he came to Singapore to perform with the legendary rock band, we clicked immediately after discovering our ardent love for vinyl toys. When I was in New York, he took me toy shopping to all the cool toy stores that he frequents, including Toy Tokyo.

Who is your favourite vinyl toy designer?
Frank Kozik. To me, he’s the Andy Warhol of vinyl toys. I’ve got tons of his cool stuff. I had the honour and pleasure of him hanging out at my art gallery where I displayed his stuff, for three days. The kind gentleman went around my gallery to sign all my Kozik figures. (pictured below in Eddie’s gallery) 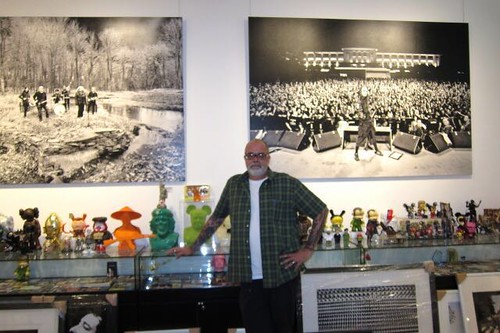 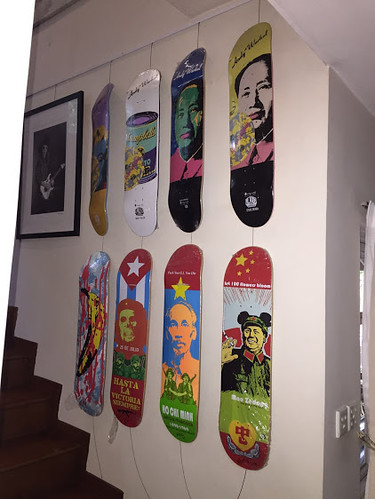 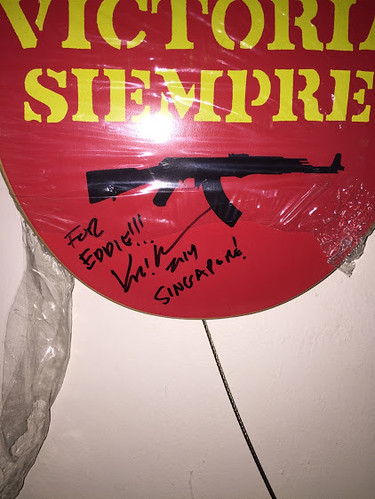 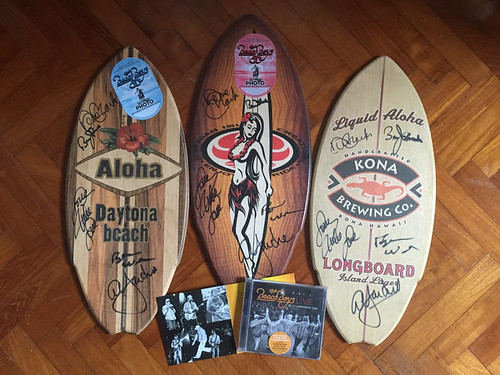 What is your most treasured piece and why?
It has to be my three mini surf boards that all five members of Beach Boys autographed for me. The image that I took of Brian Wilson, the legendary music genius signing on them is featured in their official 50th Anniversary live CD! (pictured below) 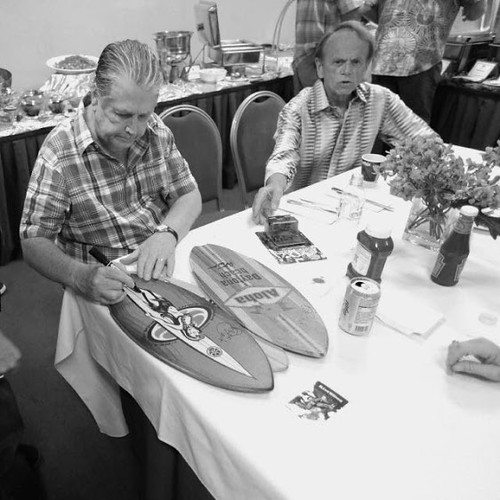 I’m also known to have a formidable collection of Galactus figures (picture of Eddie’s collecton below). Galactus eats planets for breakfast. 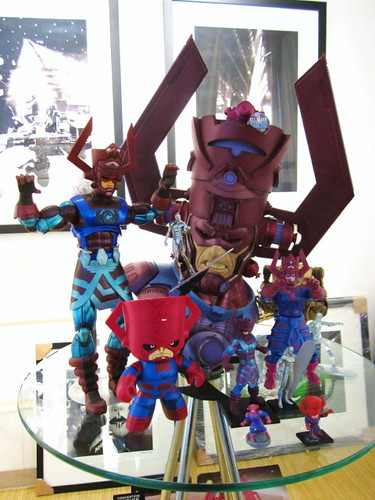 His awesomeness was first showcased in Fantastic Four comic issue #49. I still remember my awe at the initial sight of him.

Is your creativity affected by having toys around you?
Definitely! I have observed creative people who I know, have some form of toy figures of their comic or music heroes around their homes, work desks and recording studios.

Being surrounded by one’s favourite figures is like being in the company of trusted and fun friends. It’s akin to the Beatles’ Sgt Pepper album cover where each band member included their heroes’ images on the cover. 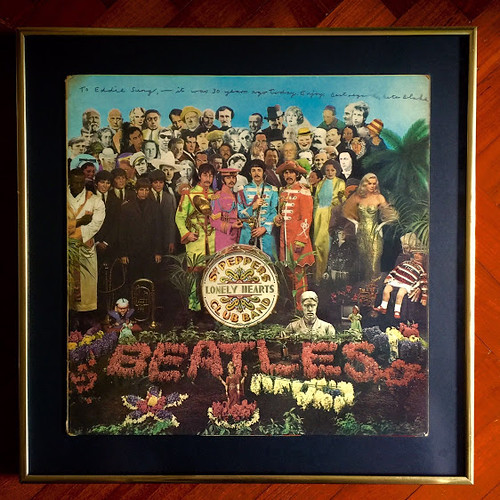 I’m honoured to have in my holy-grail music collection, a signed personalised copy of the album cover belonging to its concept creator, legendary UK pop artist, Sir Peter Blake. (pictured above)

Music, rock photography and toy collecting have all one purpose in my Life – they keep me young. They are the Fountains of Youth!

Grow older but don’t Be Old!

When crossing paths with detractors, I always advise my fellow Creative Comrades, “Don’t listen to backseat drivers, especially those who can’t drive!”

Eddie Sung is an award winning music photographer based in Singapore. Check out Eddie’s fantastic rock music images at here

All photos courtesy of Eddie Sung, except for the image of Eddie in his gallery, courtesy of Intersection SG.